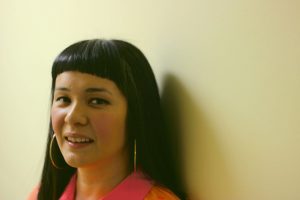 Though I stumbled into teaching as a side hustle to writing, I quickly discovered that making it my job to explain what narrative is fortified my own storytelling work. I’ve been teaching writing at the post-secondary level for ten years, to writers of every stripe, from engineers to chefs to autoworkers to creative writing students.

My novel An Ocean of Minutes is forthcoming this summer from Penguin Random House Canada, and it’s also coming out in the US, the UK and Australia, and in translation in China and the Netherlands. It’s either a rip-roaring time travel love story, or a contemplative inquiry into the nature of displacement, the global economy, and what it means to be mortal (whichever you like better, it’s that one). I have an MFA in Creative Writing from the University of Houston, and a B.A. from U of T in Political Science (Hegel fans, throw your hands up!) and English Literature. My writing has been published in the Southampton Review, GRIST, the Guardian, Salon, the Millions, Bitch Magazine, Utne Reader, in several college writing textbooks, and my novella The Same Woman was released by Invisible Publishing in 2007. I previously served on the editorial boards of Gulf Coast, Racialicious and Shameless Magazine.

I was born in Toronto but I grew up mostly in Singapore, and by the time I was 17 I had attended ten different schools, so I have a soft spot for any students feeling a little lost in the wide world. In past lives I’ve worked as a farmhand, a cocktail server, a souvlaki grill cook, a theatre usher, and an elevator courier; you can say I started from the bottom.

Most important lesson I’ve learned this year: Bring a stapler.

My favourite qualities in a student: The willingness to make mistakes in order to learn (& stapled work).

My favourite qualities in a teacher: The willingness to change one’s mind.

My idea of perfect happiness: Going to the movies.

My idea of complete misery: Not going to the movies.

My favourite quotation, motto, or phrase: “I don’t think so.”

Language I’d love to be able to speak: Teochew – my dad’s first language.

My least favourite historical, literary, or cinematic character: Jim from The Office.

The most embarrassing song/album in my iTunes or music collection: Mariah Carey, except I ain’t embarrassed about it.