This year at Sheridan Creates three professors were asked to debate the vexing question of whether technology is always an ennobling force. “Could it be,” session chair Dr. Mike McNamara provocatively asked, “that in democratizing the technological tools of creative production, we inadvertently created the million alternative facts and Pepe memes of bias-confirmation, tribalism, and culture-jamming we were meant to oppose?” The question was meant to be leading, and it certainly led professors Walid Belal (FAST), Marcel Nelson (FHASS), and Alexander Hollenberg (FHASS) through a rigorous conversation about the place of technology in our world. 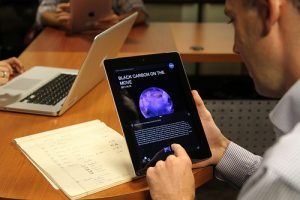 The session was no paean to technological innovation. If Belal was right to point out the exponential progress of computational technology and the ways it has galvanized both industry and individual, then Nelson and Hollenberg were equally correct to gesture towards the multiple socio-political implications of such technological creation. Belal was confident that we will one day create effective fact-checking technologies to rescue ourselves from our current deluge of alternative facts. But Nelson, a political scientist, argued that politics shapes technology as much as technology shapes politics. We can’t, in other words, simply expect better technologies to eventually fix our myriad local and global crises if those technologies are embedded within systems that exacerbate rather than ameliorate social inequality. However much companies like Twitter and Instagram operate under the mythic promise of democratization, Nelson argued that the virtual social spaces they create ultimately “reproduce unequal and dysfunctional social relations, especially since . . . that technology itself was created as a result of unequal social relations.”

“Debate” was perhaps the wrong word to describe this panel. The audience may have been expecting a vigorous, no-holds barred series of intellectual counterpunches from these three professors, but their approach was much more nuanced and constructive. Though Hollenberg, a professor of Storytelling and Narrativity, approached the problem from a very different disciplinary perspective than either Belal or Nelson, his arguments—which were themselves mini-narratives—supplemented those of his colleagues. Hollenberg spoke about the rise and fall of pneumatic tubes in New York City, which as a communications system briefly rivaled the telegraph and telephone. Today, of course, the idea of pneumatic tubes sending mail feels antiquated, and this was Hollenberg’s point: “if the ascension of some technologies over others creates radically different worlds that seem inevitable, then it also makes those alternate worlds full of pneumatic tubes feel like an impossibility when actually they are not. The success of one form of technology depends on our failure to imagine the success of others.” And that might be technology’s dirty little secret—it just as often forestalls imagination as it catalyzes it. Technology, it seems, is always constituted through the triumph of one set of values over another.

The session, well-attended if all too brief, was an outstanding example of the necessity of critical thinking amidst our creative turn—both here at Sheridan and beyond. If the panel promised a hard look at technology’s democratic failures, it did not simply shake its fist like a grump at our young century; rather, it asked a genuine and important question: who is this “us” that technology supposedly ennobles?