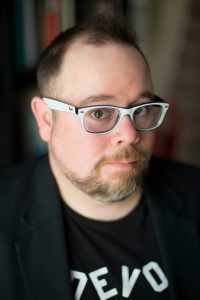 Paul Vermeersch is a Professor of Publishing in the Faculty of the Humanities and Social Sciences. An amateur visual artist, well known poet, and sought after literary editor, Paul is the author of several poetry collections and the editor of Buckrider Books, the fiction and poetry imprint of Wolsak & Wynn Publishers Ltd. He holds a Bachelor’s degree in English Language and Literature from Western University and an MFA in Creative Writing from the University of Guelph for which he received the Governor General’s Gold Medal for Academic Excellence. His poetry has appeared on shortlists for the Gerald Lampert Memorial Award, the K. M. Hunter Artist Award, and the Trillium Book Award. He has edited numerous books of poetry, fiction and memoir, some of which have gone on to receive nominations for – or win – the Scotiabank Giller Prize, the Griffin Poetry Prize, the Governor General’s Literary Award, the Trillium Book Award, the A.M. Klein Award for Poetry, and the Saskatchewan Book Award, among other honours. Before joining Sheridan, he taught at the English Language Teacher’s College of Słupsk in Poland, the University of Guelph, and the University of Toronto, and he held editorial positions at Thomas Allen Publishers, Insomniac Press, and worked on a freelance basis for a number of other publishing houses. His current creative work explores themes of evolution, de-evolution, civilization, culture, and extinction.

– The Reinvention of the Human Hand. McClelland & Stewart, 2010.

My favourite quality in a student: Imagination.

My favourite quality in a teacher: Empathy.

Most important thing I learned in kindergarten: Brian O’Donnell doesn’t share and he will bite you.

Moment in my life I’d like to re-live: The time I fed honeydew melons to a hippopotamus named Perky.

My idea of perfect happiness: Being a hippopotamus and being fed honeydew melons (seriously–you should have seen how happy this hippo was).

My idea of complete Misery: Either 320 pages by Stephen King, or 107 minutes by Rob Reiner.

In my opinion the secret to success is: Well kept.

My favourite quotation, motto, or phrase: “You must change your life.” – Rilke, Archaic Torso of Apollo.

The expression I overuse in the classroom: Look it up, don’t make it up.

If I weren’t a teacher I’d be: An astrobiologist.

The talent or skill I wish I had: To write music, or genetic engineering.

Language I’d love to be able to speak: ASL.

On my bucket list: A nice, old galvanized metal one like they use on maple syrup farms.

My favourite food: Homemade macaroni and cheese, and anyone who says different is a liar.

The most embarrassing album in my iTunes or music collection: Revenge of the Nerds Soundtrack.