Roots of Freedom Nurtured at Sheridan

The Canadian Caribbean Association of Halton (CCAH), in partnership with Oakville Museum and Sheridan College, presented the 10th Annual Roots of Freedom Festival on October 26-27, 2016. 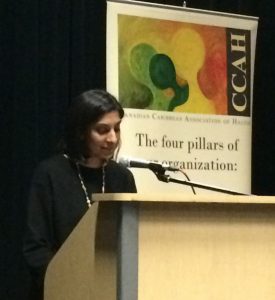 On Wednesday, October 26th in the Black Box Theatre of Oakville’s Queen Elizabeth Park Community Centre, Professor Alia Somani (English, Postcolonial Literature) delivered an insightful presentation on the United States Treasury Department’s announcement that Harriet Tubman, a former slave and abolitionist from the 1800s, would appear on the US twenty dollar bill and that her image would replace that of Andrew Jackson, a known slave owner and former president of the United States.

Alia shared the value of noting that banknotes, like other commemorative sites, have a symbolic importance insofar as they tell a story about the United States; in particular, they illustrate a story of white, male triumphalism. She pointed out that US currency has never included an African American.  For Alia, “Tubman’s presence on the twenty has the potential to rupture the dominant narrative of America. To see Tubman returning our gaze might remind us that women have played an important role in the founding of America; it might also remind us that among the icons of the United States are former slaves and abolitionists, and those who fought for equality.” 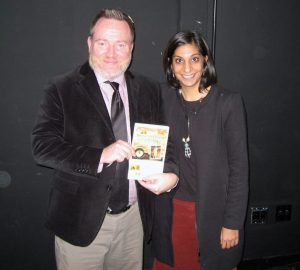 As she concluded her presentation, Alia observed an irony in this important shift: “When the announcement by the Treasury Secretary was made, it was revealed that Tubman would be placed on the front of the bill, but that Jackson would still have a place on the back. This announcement angered many people who pointed out that Harriet Tubman, a freed slave, would be joined permanently with Andrew Jackson, a slave owner, and a president known for the genocidal atrocities he perpetrated against Native Americans. Harriet Tubman would be tied to Andrew Jackson forever.” Her closing thoughts invited the audience to remember that although change is under way, the move toward freedom for all, in many ways, has much more work to be done.

For more information on the Canadian Caribbean Association of Halton and the Roots of Freedom Festival, please visit www.RootsOfFreedomFestival.com.